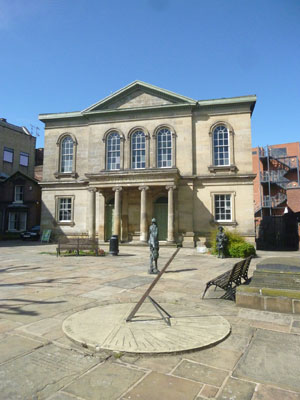 There are several areas of interest around Upper Chapel. The forecourt at the front of the building is a beautiful, peaceful haven in the city centre where many people come to just sit and watch the world go by or enjoy their lunch break. It is also home to a selection of statues by the Sheffield artist George Fullard, called ‘Mother and Child’, ‘Running Woman’ and ‘Angry Woman’. The garden area in the forecourt is also home to a number of notable family tombs dating back to the 1800’s and a large sundial.

Upper Chapel and the forecourt area now face Norfolk Street, but when the building was first erected in 1700, the building initially faced towards Fargate. But as more buildings obscured the front, it was decided in the 1840’s to turn the chapel around to face across the fields, were the Old Monk Bar now stands. It was faced with stone and a tetrastyle portico was added. 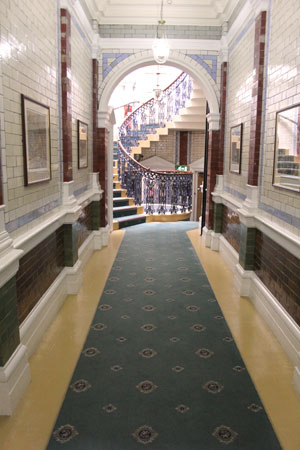 Channing Hall is obviously another notable building around Upper Chapel, located in Surrey Street. The building was added in 1881 for ‘religious, educational and social purposes’ and is named after the 19th Century American Unitarian minister Dr. William Ellery Channing. It was designed by Flockton and Gibbs (who also designed the Mappin Art Gallery and St. John’s Ranmoor) and is in the Italianate style. The hall is accessed from the chapel or its separate Surrey Street entrance by an attractive spiral staircase.

In addition to the Old Monk Bar which was built in the mid 1700’s, Upper Chapel also faces The Ruskin Building, a Grade 11 listed building built in 1875. Just around the corner on Norfolk Street, a doorway inscribed "The Jeffie Bainbridge Children's Shelter” can be found. The shelter provided food and shelter for waifs and strays, and was erected by Emerson Bainbridge, a well known philanthropist and Justice of the Peace, in memory of his wife. It was opened by the Duchess of Portland in 1894.

If groups are keen to look around the Chapel then a tour can be arranged with the Minister, for a small donation to Chapel Funds.