Music in the Gardens 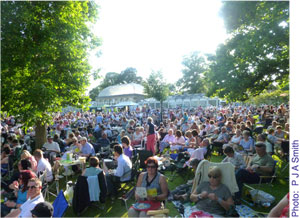 How fortunate we are in Sheffield to have the wonderful Botanical Gardens situated so near to the city centre - an oasis of tranquility in a modern, vibrant city.

Designed and built for the Sheffield Botanical and Horticultural Society in 1836 by the famous Scottish Horticulturist, Robert Marnock , its ownership was taken over by the Sheffield Town Trust at the end of the 19th century, thus giving free entry to everyone.

The Gardens were the subject of a major renovation project in the early years of the current century, costing £6.9m, funded in the main by the Heritage Lottery Fund. On completion of the renovation project the Gardens' curator was tasked with bringing added attractions to the Gardens i.e. open-air theatre, art and music.

Thus in 2006 when some Rotarians from the Rotary Club of Sheffield came up with the idea of concerts in the Gardens, the curator willingly accepted the offer to organise such events.

Originally called 'Jazz in the Gardens, the first concerts held over two nights were a great success. It was repeated the following year, and by now the Rotary Club of Sheffield found it had a winner in its hands and in 2008 other Rotary Clubs in the Sheffield area were invited to become involved; the name was changed to 'Music in the Gardens'; and it became a four day musical extravaganza bringing in well known artistes from different genres of music.

`Music in the Gardens' certainly adds to the amenities in the Botanical Gardens, but at the same time all the profits made on the event are distributed to charities, most of which have a local connection. In 2014, over £36,000 was distributed to charities with around 10,000 people having a good night out listening to music in the beautiful surroundings of our Botanical Gardens.

2015 is a special year for 'Music in the Gardens', its 10th Anniversary. The event will take place from Thursday 2nd July to Sunday 5th July. So far signed up to perform are: Paul Carrack and The Proclaimers and on the Sunday evening we are calling the evening Last Night in the Gardens' with the Unite Union Brass Band and the Sheffield Philharmonic Orchestra, finishing the whole event with a spectacular firework display.

The easiest way to obtain tickets is through the website: www.sivtickets.com

`From small acorns !...' Music in the Gardens has grown in status over 10 years and is now a part of the Summer scene in the City. It is a great sight to see people sitting on their seats and rugs on a nice Summer's evening eating their picnic, enjoying a glass (or two) of wine whilst listening to good music.

Do come and join us !