Maintaining the fabric of our premises

Much work has taken place over recent years, under the stewardship of the Trustees, to improve and enhance the Upper Chapel complex of buildings. The largest project was the installation of the lift, providing alternative and disabled access from the Chapel and Hollis Building (ground floor level) to the Surrey Street level, the first floor of the Hollis Building and up to Channing Hall - with the associated ease of access for equipment and other large items.

The Vestry has since been completely refurbished and many other smaller maintenance and facility improvement projects carried out, sympathetically and to the highest standard possible.

The 'Committee Room', accessed from the Surrey Street spiral staircase, has been completely refurbished and will become the Chapel Office, occupied, as a base, by our Premises Manager, Marc. In times when all too many original features can be ripped out of cherished buildings (of course sometimes the buildings themselves, if not under protection, disappear) Upper Chapel's fabric has to be - and should be - properly preserved.

Within the new office, the original tiled fireplace was uncovered, re-fitted and cleaned. An early Edwardian (1903) solid mahogany fire surround was obtained recently at favourable cost from a Dronfield antiques dealer - a leading light in the Hallamshire Historic Buildings Society - and who was delighted that the piece was going to such a good home. It has now been installed, with a custom-cut black granite plinth, beneath.

It was suggested that a recent example of one of these smaller 'heritage related' projects might make a suitable article for The Record:

Within the centre of the ceiling, is an octagonal light dome, with frames containing original Victorian glass, bearing predominantly, a Fleur-de-Lys repeat design. Two of the panes had at some point over the years, been replaced with what could only be described as a `1970's' style patterned glass - and a third was cracked. The original glass has a finely ribbed surface which cannot be replicated these days from a stock glass - however we were confident that it would be possible to re-create the etched design itself onto plain, toughened glass and have it sand-blasted to match, as closely as possible, the remaining original panels.

The first task was to remove one of the frames, take accurate measurements, ensuring that all three panes/frames requiring replacement were of the same size within a millimetre or two (which they were) and then remove from the glass which would remain, the film coating which had built up partly from many years of fire-place smoke and nicotine. 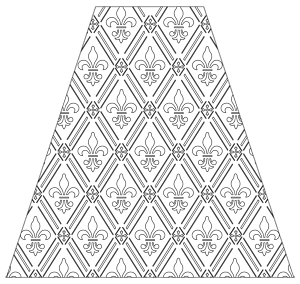 An accurate tracing was duly obtained of one of the removed original panes which was then plotted into a digital line drawing in-house. The drawing was sent (emailed) to a long-established, high quality glass engraver based in Northamptonshire whereupon it was scanned and traced again - the resulting image finally being machine-cut to make a template/mask for the sand-blasting.

A photograph of one of the original panels is shown on the previous page. The image shown right, is a much reduced version of the line drawing made to replicate the design. At the time of publication, the three new glass panels had just arrived and should be fitted very soon.